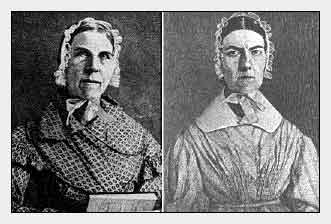 1. The Grimke sisters public speaking for the abolitionist cause drew criticism of American society because their society did not accept women as public speakers especially for controversial topics. They continued with their speaking even though they faced criticism and they defended themselves such as when Catharine Beecher commented negatively on Angelina’s public speaking. When this happened Angelina wrote a series of letters to Beecher, later published with the title "Letters to Catharine Beecher." Also when Angelina wrote a letter to the editor of William Lloyd Garrison’s paper, The Liberator, which he published without her knowledge. This letter caused both sisters to be disapproved of by the Quaker community. Although these things happened they defended the abolitionist cause and their right to publicly speak for that cause.

2. The methods the Grimke sisters used to improve American life were they were among the first women to speak publicly in the US. They argued that white women had a natural bond with black women specifically slaves. They published many books and pamphlets supporting their ides such as when Sarah published "Epistle to the Clergy of the Southern States (1836)" and Angelina published an "Appeal to the Women of the Nominally Free States" in 1837 and when Angelina and her husband Theodore Weld published “American Slavery as It Is: Testimony of a Thousand Witnesses(1839)." They also denounced slavery and racial prejudice which was extreme even for radical abolitionalists of that time. They lectured on antislavery throughout New England as the first female agents of the American Anti-Slavery Society and elisted women in the abolitionist cause. They also became pioneers in the women's rights movement. They spent the rest of their lives teaching school for girls and remained active in abolition and women’s rights.

3. Although the Grimke sisters created a lot of controversy and endured a lot of criticism they did have some success. One successful thing they did was they were the first female agents of the American Anti-Slavery Society in New England and they enlisted many women in the abolitionist cause. They also became pioneers in the women's rights movement and inspired many followers with their various books and pamphlets expressing their opinions on the controversial topics they spoke about.

4. The Grimke sisters were interesting historical figures because they witnessed the cruelty of slavery at first hand, and because it displeased them they traveled the country speaking out against it. They had witnessed slavery at a young age because their father owned a large plantation with many slaves. They were appalled by the conditions these slaves had to work under and that’s what prompted their speaking for abolition and eventually racial prejudice, equality, and women’s rights specifically in voting. One way they showed they cared for these topics was when they adopted two black nephews into their family and paid for their education.

6. The lasting impact the Grimke sisters have on American society is if it had not been for them as well as others fighting for the same things as they did we may not have many of the things we have today such as no slavery, equality, and women’s rights. These sisters as well as their followers influenced things such as the abolition of slavery, everyone being equal no matter what race, and women’s right to vote. All of these things have been put into play which is shown in America because according to law all people are equal, people can not own slaves, and women have the right to vote. If it had not been for them America may not have made these advances and things might still be the way they used to be.