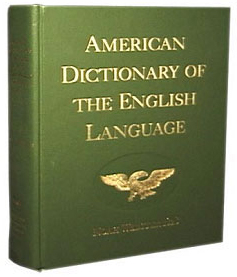 Criticism:
Noah Webster criticized American society for being in need of an intellectual foundation. He believed that American nationalism was superior to Europe because American values were superior. Webster argued that the English language had been corrupted by the British aristocracy, which set its own standard for proper spelling and pronunciation. He also rejected the idea that the study of Greek and Latin must come before the study of English grammar. He also criticized American elementary schools for being overcrowded, poorly staffed by untrained teachers, and poorly equipped with no desks and insufficient textbooks from England. Webster's primary interests became improving American education and language.

Methods:
Since Webster believed that Americans should learn from American books, not British ones, he began writing a a three volume compendium titled, A Grammatical Institute of the English Language. This work consisted of a speller (1783), a grammar (1784), and a reader(1785). He arranged the Speller so it could teach students how to read, spell, and pronounce words in a simple way. In reforming the English language, Webster changed the spellings of many English words in order to keep nouns and their derivatives spelled alike. In 1806, Webster published his first dictionary titled, A Compendious Dictionary of the English language. A year later, he began working on a more comprehensive dictionary which was called An American Dictionary of the English Language. It took 27 years to complete this and in that time, he learned 26 languages that would assist him in creating the dictionary.

Success:
Webster was successful in promoting reform through his various works. His book, the Speller, was the most popular American book of its time and it was selling a million copies per year by 1861. This book was beneficial to the education of America's youth because it provided the first effective way of teaching children how to read, spell, and pronounce words. He succeeded in altering the English language in a way that broke away from British influence because he changed the spellings of multiple words, such as "centre" to "center" and "honour" to "honor. Also, Webster's dictionary helped to standardize American speech which was a concern of his because Americans in different parts of the country spelled, pronounced, and used words differently. All of his works were crucial to the reformation of American education and the English language.

Historical Figure:
Noah Webster is an interesting historical figure because he is known as the "first" American author since he was the earliest to make a living from his publications. He has also become known as the "father of copyright" because due to unauthorized printing of his books, and varying copyright laws among the thirteen states, Webster suggested the federal copyright law that was successfully passed in 1790.

Impact:
Webster's reforms have greatly impacted American education as well as the English language. His book, the Speller, helped create the popular contests known as spelling bees. His indication of pronunciations by using diacritical marks was also innovative. In fact, lexicographers still use similar markings in the early twenty-first century. Webster's dictionary is now honored in the history of American literature and still to this day his last name is connected to the dictionary, which is now published as the Merriam-Webster dictionary.