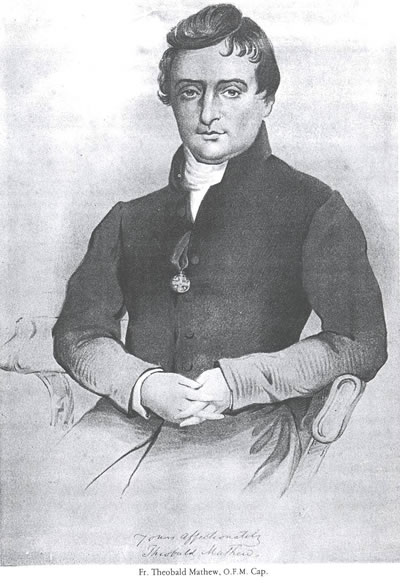 1. The criticism of American society that Father Theobald Mathew had was that drunkenness had become widespread in Ireland . He was later strongly against alcohol.

2.One method that Father Theobald Mathew used to improve American life was by making a total abstinence society. This society established the "cork total abstinence society," which stated that people who signed the pledge would be sober for life. Another method he used was by organizing schools, industrial classes, and benefit societies. He made all those things to teach Catholic education in Ireland.

3. Theobald Mathew was able to spread total abstinence to thousands of people. He said to a friend in America " I hoisted the banner of temperance in almost every parish in Ireland." Crime also diminished because of his movement.

4. Father Theobald Mathew is an interesting historical figure because he believed in total commitment, not temporary commitment. He was also interesting and different becasue in order to avoid upsetting his powerful American friends, he ignored an invitation to publicly endorse abolition. This sacrificed his friendship with the movement, something not many people did.

5. A lasting impact that Theobald Mathew's reforms had on American society was that people still try to change their lives and stay sober from certain things. One example of this is lent; for lent people deny themselves items or change their behavior during this time period.