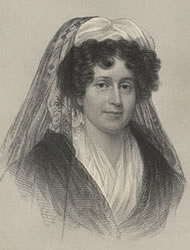 Emma Hart Willard was known for her determination to improve women education and opening a school of her own in order to teach women subjects they were not allowed to learn. In 1818 she approached the New York legislature and appealed for support of her plan for improving female education. She did not agree with the American society of not allowing women to learn the same material and curriculum as men.
By opening new academies and schools for women to attend, Willard opened new opportunities for women to be just as successful as men. One of Willard's works called An Address to the Public; Particularly to the Members of the Legislature of New-York and Proposing a Plan for Improving Female Education, proved to society that women were intellectually just as capable as boys. Though Willard did not gain state funding for her schools, she did influence the nation to be more flexible with women rights, especially in education.
Governor Clinton wanted her to move to New York state for this to be possible. Her school was opened in 1819 in Waterford, New york and in 1821 the Troy Female Seminary was founded under her leadership. Troy soon became famous to all and offered collegiate education to women and new opportunities to women teachers.
In 1814, she opened the Middlebury Female Seminary in her home and began to proceed with her teachings trying to stand up to American society saying that women deserve equal rights to men. Willard proved the ability of women to learn and teach and some graduates of her school were wanted to staff the growing number of public schools for both girls and boys. By the time she passed, Willard could take satisfaction in an educational system that opened many more opportunities for women as both students and teachers. Emma was seen as an interesting historical figure because of all the works she published and wrote supporting women rights and trying to make possible a new education system for women. The Emma Willard Private School is still opened today in Troy, New York and all the students there are treated with complete respect for their opportunities represented to them by the boarding school.
The impact that Willard's works has had on American society today is that women have the same equal opportunities at academics as men do. Today, women perform much better in academics because of the women's rights movement presented by Emma Willard. A private school is even named after her because she made such a lasting impact on American society and the ability for women to perform equally to men. A statue was erected in honor of Emma Willard and is shown in Troy, New York where she grew up.